LIVING COLOUR To Release ‘THE CHAIR IN THE DOORWAY’ 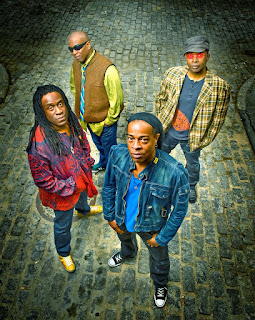 New York/London — Living Colour will release their first new studio album in five years entitled The Chair In The Doorway on September 15 via Megaforce Records. The legendary downtown NYC rock band, who exploded out of CBGB’s in the late ’80s, landing all over MTV, the cover of Rolling Stone and stadium stages around the world with their Grammy Award-winning, multi-platinum debut album Vivid, are back and “fierce” as ever.

Original members Vernon Reid, Corey Glover, Will Calhoun and (since 1993) Doug Wimbish gathered at Sono Studios outside of Prague in The Czech Republic during the fall of 2008 and spring of 2009 to write and record what would become The Chair In The Doorway. The results stretch from the modern soul anthem “Behind The Sun” to the politically-charged, heavy rock of “DecaDance” to the sacred steel blues of “Bless Those.” The artwork for The Chair In The Doorway was compiled from thousands of contest entries by fans from around the world.

“We feel like this is the best record we’ve made yet and we couldn’t be more excited to be releasing it with the legendary Megaforce Records,” says guitarist Vernon Reid. “Some of our favorite bands were or are Megaforce artists, Metallica, Bad Brains, Anthrax, Black Crowes, so it’s an honor to be part of a label with a great legacy.”

Living Colour will announce plans for a world tour shortly. With dates set to begin in September, it will include their first North American tour in four years along with performances in South America, Europe, Australia and Asia.

Having helped to pave the way for a number of contemporary African-American artists to follow in their wake, ranging from Rage Against The Machine to Lenny Kravitz to Ben Harper, with a multi-dimensional sound that drew equally from Jimi Hendrix, Bad Brains, Talking Heads and Ornette Coleman, the success of Living Colour broke down the color barriers in rock music. Guitarist and founding member Vernon Reid also founded the Black Rock Coalition to use his influence to further this cause.

Discovered by Mick Jagger who produced their first demo and later offered them an opening slot with The Rolling Stones, Living Colour would go on to create a repertoire that includes a multitude of classic songs, including “Cult Of Personality,” “Elvis Is Dead,” “Open Letter To A Landlord,” “Glamour Boys” and “Love Rears Its Ugly Head.” With The Chair In The Doorway, the fifth album of their storied career, Living Colour expands the scope of their timeless body of work and, in the process, proves vital as ever.

Posted by admin at 9:56 AM 2 comments: Links to this post 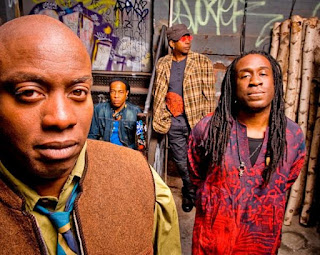 Living Colour’s original lineup — Vernon Reid, Corey Glover, Will Calhoun and Doug Wimbish, who joined the band in 1993 — will release their first new studio album in five years on September 15th on Megaforce Records. The band, who broke big in 1988 with “Cult of Personality,” recorded The Chair In The Doorway, their fifth LP, in the Czech Republic. The album features hard rock, soul and politically charged tracks, and Reid describes it as “the best record we’ve made yet.” A world tour will launch in September.
Rolling Stone
Posted by admin at 9:55 AM 1 comment: Links to this post 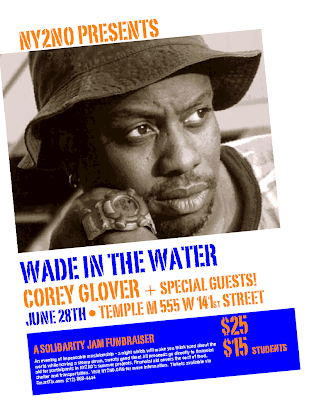 This will be an evening of impeccable musicianship – a night which will make you think hard about the world and your own inner life, while having a stomp down, sweaty good time! All in a community of love and like-minded freedom-fighters. Living Colour’s guitarist Vernon Reid (one of Rolling Stone's 100 best guitarists of ALL TIME), vocalist and multi-instrumentalist V. Jeffery Smith of The Family Stand, and Dean Bowman, former lead singer of the Screaming Headless Torsos are among the musicians scheduled to appear. On Sunday, 6/28/09 we plan on taking it to church at Temple M. Join us.

Temple M is possibly Harlem’s best-kept secret, a federal masterpiece of Newport dimension, with a French twist, nestled in historic Hamilton Heights in Harlem. It was built in 1917 from the assemblage of two adjacent Victorian mansions, on the same charming tree-lined street as the Alexander Hamilton Grange. Temple M is now blooming after four years of focused vision and restoration, dedicated to honor a reviving Harlem and the vibrant soul of this building, which is said to have been once a Synagogue, and then a Church. The capacity at Temple M is 200 people, so please don’t risk being turned away at the door. This is a one night only event.

Posted by admin at 1:46 PM No comments: Links to this post

Vernon Reid and Masque will be performing June 10th @ 10pm at The Stone in New York, NY.

www.NY2NO.org have some huge projects coming up this summer and really need your financial support and of course your solidarity. As you probably already know, we are proud to provide financial aid to all who may require it and believe that our projects will not be effective without the economic diversity of our participants. Here are some of the projects we have in the works for June, July and August:

Summer New Orleans Brigades: involves taking 300 young people from New York to New Orleans to work on recovery and learn about the struggles faced by survivors. The trips are focused on building solidarity between groups and learning about similarities in the inequalities in New Orleans and our own city. We will be working to construct community gardens in the Lower Ninth Ward and canvass the community to build stronger community involvement.

NO2NY trip: a group of young residents of New Orleans are planning a trip to New York City to reciprocate our efforts in New Orleans to New York, build further solidarity, and practice organizing for themselves. We hope that this trip will result in a powerful youth led organization to lead the recovery in New Orleans. We will be working directly doing direct action and organizing with organizations tackling action for food security and sustainability and environmental justice. We will be paring these organizations with other community-based organizations combating gentrification, as these are parallel struggles all over the United States. We believe that the NO2NY trip is essential for the productivity of the entire New Orleans Summer brigades as we hope to be following the leadership of the young people from New Orleans for the rest of the summer and the rest of our trips following until the Lower Ninth Ward is self-sustainable.

New York Trips: are an organizing tool to get the masses of unoccupied New York City youth to get involved in the struggles and solutions in their own communities. These trips focus on education on struggles in New York communities, communal living experience, working on action in the city for environmental, food, and social justice. We will be doing community outreach and urban farming.

NY2NO is a 501(c)3 not-for-profit organization. They are a youth-led, consensus-based organization creating a network of young people interested in organizing and mobilizing across New York City. NY2NO works in solidarity with those most affected by the social, racial, and economic inequalities in both New York and New Orleans. Through this, the youth break down barriers and work together to combat racism and classism and move towards an egalitarian society.

Price: This fundraiser has a suggested minimum donation of $25, $15 for students and the un/under-employed. If you wish to support NY2NO but geography prevents you from being at the event, please consider making an online donation http://ny2no.com/donate.htm

In Solidarity,
New York 2 New Orleans Coalition
Posted by admin at 9:28 AM No comments: Links to this post

Stay up-to-date with all!
Posted by admin at 11:35 AM No comments: Links to this post

Please check with local venues to confirm show dates and details.
Posted by admin at 4:33 AM No comments: Links to this post

The Roots in London at the Ornette Coleman festival w/ Vernon Reid, David Murray and more

The Roots in London at the Ornette Coleman festival w/ Vernon Reid, David Murray and more...

The Clore Ballroom at 10.30pm: A special post-show jam session featuring festival artists. Admission free.
Posted by admin at 1:09 AM No comments: Links to this post