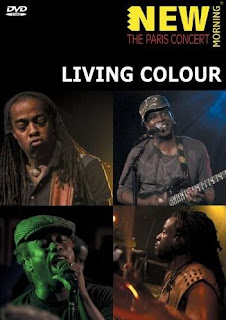 For their millions of fans aroud the world, Living Colour needs no introductions: Vernon Reid, Will Calhoun, Doug Wimbish & Corey Glover are among the leading New York musicians who helped break down the doors leading to a renewed musical landscape in the 80s. They're one the very few groups - if not the first & only - that can be coined as authentic sons of Jimi Hendrix. This is obvious in the intense concert these masters of groove gave at the New Morning in 2007. A treat for all connaisseurs who are aware of the fact that Living Colour's groundbreaking music is the most impressive when it is performed in the intimate heat of a club!

* 'Cult of Personality' won a Grammy Award for Best Hard Rock Performance in 1989
* Their highest charting single was 'Type' (first song on DVD)
* They were named Best New Artist at the 1989 MTV Video Music Awards
* Living Colour was ranked #70 on VH1's 100 Greatest Artists of Hard Rock.

Out in stores/online November 11th!
Posted by admin at 4:48 PM